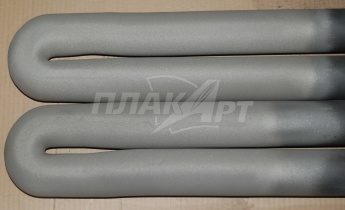 In fuels such as Moscow Region, Chelyabinsk and Kizelovsky coal, anthracite culm and ash shale has a high abrasive ability. When burned, the flue gases carry with them a large amount of ash particles that abrade the metal of the pipes. Ash wear reduces the turnaround time of boiler units, increases the duration of idle boilers under repair, while consuming a large number of pipes and sheet metal. If there is an oversight of the degree of wear of the pipes, fistulas and tears are formed, leading to an emergency stop of the unit. The problem of ash wear is also topical when burning non-standard types of fuel (chips, waste), when disposing of solid waste.

Table 1. The abrasive coefficients of the ash of some fuels (according to the VTI).

The greatest ash erosion (up to 80% of cases) is observed in convective mines, in which water economizer coils or steam superheater coils are located and in which gases move from top to bottom. In this case, the ash particles fly at a speed exceeding the velocity of the gases, and when they strike the surface of the pipe, metal particles are cut off. The greatest wear of the pipe occurs in places located approximately at an angle of 35 ° to the vertical axis. Ash erosion often occurs in places difficult to see. Increasing the gas velocity by 2 times accelerates ash wear of pipes by about 8 times. The upper rows of coil pipes and those sections adjacent to the rear wall of the convective shaft are particularly susceptible to wear; pipe sections at the dividing walls and at the narrowing of gas ducts; sections of pipes located under the edges of the baffles, visors and around the buckles.

In a corrosive environment, wear increases. Aggressive medium penetrates into cracks formed as a result of metal peeling during the work hardening caused by blows of solid particles. Under the influence of high temperatures, the surface is depleted and the metal is oxidized. The oxide film formed on the surface is mechanically less durable than the base metal. Depending on the composition of the corrosive environment and temperature, the wear rate of the pipe increases.
The erosion process often contributes to the destruction of pipes. For example, when a wormhole is formed in the welder joint of an economizer, high pressure water draws ash particles out of gases and in a short time causes secondary erosion damage to adjacent pipes.
There is a method of dealing with abrasive abrasion of pipes of heating surfaces of the boiler by installing protective pads on the frontal areas of the upper pipes of convective heating surfaces. The disadvantage of this method is to reduce the efficiency of heat transfer. In fact, the lining reflects from the heat exchanger not only ash, but also heat. The efficiency drops.

JSC "Plakart" performs works on spraying or surfacing of heat-resistant metal coatings on steam superheaters, economizers of boilers to protect them from ash wear, high-temperature corrosion. Coatings are applied both to new pipes during their production, and during repairs, at the site of operation of the boilers. During the deposition of a metal coating, the surface temperature does not rise above 120 ° C, which prevents changes in the metal structure and allows the coating to be applied over the welds. A thin (250-300 µm) heat-resistant metal coating does not reduce the heat transfer coefficient, while significantly reducing abrasive and corrosive wear. Surfacing of metal coatings allows you to build up an even thicker layer that is resistant to shock loads.
Such solutions have proven themselves in foreign practice, providing an increase in the life of steam superheater pipes from 1-3 to 8-12 years (including in incinerators, without the use of protective linings). The use of these coatings in the Russian conditions will allow to implement solutions for resource saving, energy saving, import substitution.