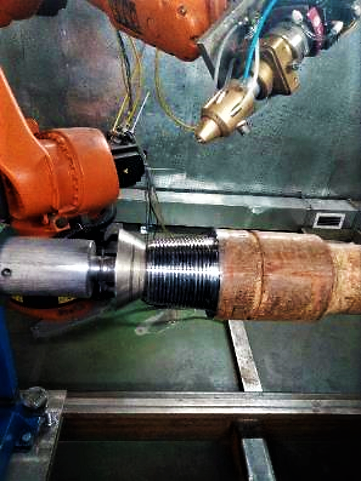 The diode laser beam and the hardfacing powder or cored wire material is simultaneously introduced into the laser beam and melted. The diode lasers unique beam enables the welding of a very thin layer of the hardfacing material. The thin layer results in a, low heat input, shallow heat affected zone , and rapid cooling rates.  These benefits significantly limit the amount of dilution of base metal but more significantly the disassociation of the hardfacing cermic particles, such as tungsten carbide.  As compared with other welding processes with higher heat inputs, for a given hardfacing alloy the fast cooling rate of the laser process produces an overlay with a significantly higher hardness and finer microstructure.

Tungsten carbide is the standard for high performance hardfacing. It is very chemically stable at molten metal temperatures and not reactive as is the case with diamond [carbon], silicon and titanium. It is has a very high density as compared to silicon carbide, titanium carbide and chrome carbide,  which means that it will not float on the molten metal.